Mermaiding in the UK is becoming more popular, and with it an industry is being built around it. Education, public performances, trips, children’s parties and with this happening the budding mermaids need quality equipment.

Choosing a silicon mermaid tail and a tailmaker can be somewhat of a minefield; with most of the well-known companies based abroad and little known about those closer to home.

Most completely bespoke tails from popular tailmakers cost in the region of $2000-$3000 upwards just for the tail. Some tailmakers have devised more ‘budget friendly’ tails that are a type of ‘off the peg’, which compromises the individuality of the mermaid; some are not full silicone and some don’t contain a professionally made monofin which is essential when diving to depth in a tail as a performance mermaid. Not to mention the horror stories that crop up on social media and mermaid discussion sites, about tail quality, fit, after sales customer service, shipping time, shipping costs and customs import duty charges, which in some cases have run to hundreds of pounds extra that was not originally accounted for.

Investing in a full silicone mermaid tail, and finding a company that can deliver  – quality, fit, customer service, professionalism without the hidden charges and that can design a performance tail that encompasses a vision and individuality with passion is a tall order!

During a recent mermaid camp, hosted by Grace Page of Hire a Mermaid UK and Steve Millard of Apneists UK who taught the freediving education to a group of aspiring mermaids we caught up with Samantha Sleeman and Bernard Sleeman of Merthology Creations. We discussed all aspects of the tailmaking process (without discovering trade secrets!), from ideas, to design, to what makes their tails stand apart from the others. We took a close look at Sam’s own personal silicone tail that she had brought along that she made several years ago, that has been well used in both swimming pools and in open water and was still in very good condition. The body of the tail had no seams down the sides – in fact it was virtually seamless. The silicone was incredibly stretchy but not thick and bulky whilst still being very durable and it was of the highest quality 100% skin safe silicone. It was clear that they have done their silicone research and only use the best materials they consider to be suited to tail use.

A tail needs to be a good fit and be able to withstand the demands put on it in terms of performance. Merthology creations ensure each tail is custom fit to each individual’s body mould and double checked with provided measurements and each fluke contains a professionally made freediving fibreglass monofin as standard.

Satisfied of the quality and fit that Merthology Creations offer, it was agreed that they would make one bespoke tail and a school tail for Steve Millard’s Performance Mermaids – part of Apneists UK. However, both tails would be needed for an appearance at the Blue Planet Aquarium the following month. The review is of the bespoke tail.

That night we discussed the new fluke design and colour ideas with several images depicting different design aspects. In the following days measurements were swapped and several sketches of the design ideas done of the fluke, the first originally with plumage incorporated all over as a tribute to the traditional depictions of Sirens in Greek mythology as partial bird-like creatures who lured sailors to their doom

Sam took the sketches and applied them to her design software and sent back the resultant image, to which she took on feedback and changed the central part to a more streamlined look. Once the final image had been agreed, Sam had to scale and adjust the design to accommodate the monofin and to maintain aesthetics whilst reducing the width of the fluke which is still 950cm at its widest point and a metre long! 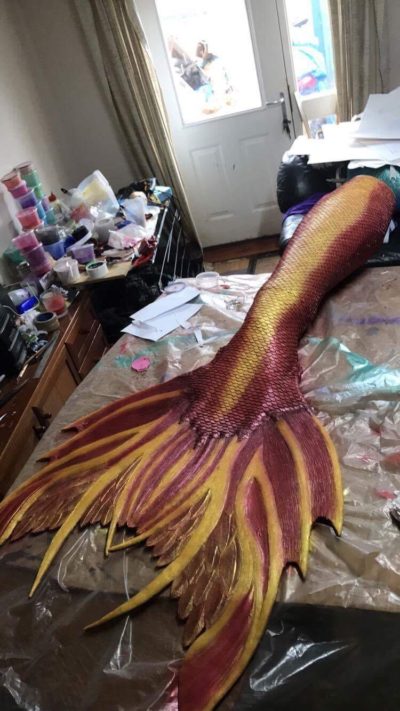 In the meantime, daily updates and pictures about the progress of a matching top that was about to go through the mold process and options were given through pictures for the pigment choices for the top and the tail.

Only six days after agreeing to make the tail we were sent some pictures of the beautifully intricate plumage of the fluke taking shape – the attention to detail was astounding; the trailing feathers were designed so that they would flutter when in the water. In the following days we were sent more update pictures with the tail taking shape in silicone with the final picture of the finished tail four days later!

The first impressions on initially seeing the new tail – The colour scheme looked great –dramatic in both design and colour with ‘fire’ as the theme, red and gold as the main colours. It has the feel of being combined with another mythical creature –  the phoenix; with the plumage of the fluke and the extended spines towards the middle which have the look of the long tail feathers the phoenix is often depicted with.

The fluke itself is a fantastic combination of dramatic curves and intricate feather detail that Sam hand sculpted to the exact sketch and design that was finally agreed upon and indeed the trailing feathers really do flutter in the water as promised. You can’t see the edges of the monofin incorporated into the fluke either in or out of water and the monofins used are all adapted by Merthology Creations to prevent any edges poking out and damaging the silicone. There are drainage channels to allow the water that enters the tail escape as you would expect, however, these are very well hidden. You can see that the fluke really has been a labor of love with amazing finish to her work. Even the small details are considered – with the suggestion of a small intricate gold starfish to complete the plain red scale top – a beautiful finishing touch.

As far as the colour of the tail was concerned, the depth of the colour was perfect & it is definitely a beautiful red! The pigment itself is incorporated into the silicone – so no fear of the colour rubbing or peeling off, but with the blending and detail done with an airbrush.

The scales of the body are also detailed as they are hand sculpted textured scales, however, they do not detract from the design of the tail as they are still subtle – no scalloped edges or heavily detailed on top which would have competed and detracted from the detail that has been incorporated into the fluke. The scales are just the right size and shape and are also uniform. The tail is virtually seamless in the same way Sam’s tail is – there are no seams down the sides which adds to the realism of the tail. The thickness of the silicone is still thick enough to be durable, so no need for a lining material for reinforcement, but not so thick as to be cumbersome – the body can be pulled down over itself to the fluke, so you can reach the foot pockets of the monofin easier and the inside of the body is nice and smooth to enable lubricant to be used – making the process of putting the tail on and taking it off more straightforward which is handy if you are doing that multiple times, for example, in between performances.

The fit of the tail is also very good – the tails are designed with a snug fit as the silicone itself does have a significant amount of stretch to it – no baggy waist that fills with water when duck diving or swimming. You can also decide where you want the top of the tail to end

We invited Merthology Creations to the first swim of the two new tails:

So in conclusion, ordering a tail from Merthology Creations has been an absolute pleasure from design to first swim. The service has been completely professional throughout. All feedback is taken on board fully so they really can make any tail, exactly as you imagined it. Communication has been excellent throughout with regular progress updates and pictures right from the concept phase through to the sculpting and then the final product. Even the aftercare has been amazing – after the first swim and performance in the aquarium, we wanted a minor adjustment made to the top which was arranged and was picked back up the following weekend – fantastic service and one which could not have been done easily if the tail had been purchased from abroad.

There are currently several stock fluke designs to choose from. More designs are currently underway and in production including the “Anita” fluke which was developed for this bespoke tail but will soon be available for you to choose for yourself. New fluke designs can be made to order. Decorative dorsal, hip and heel fins can be added in any combination. There are four silicone top designs, including a silicone shell bra, with more designs coming soon. Bracers are also available in a variety of lengths. Prices start at £1,495 for a custom fit tail in your choice of colour combination, with a stock fluke and body sheath with extras added at additional cost. 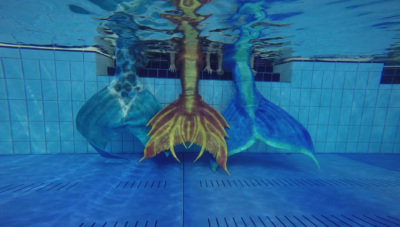 We have already used the tail in an aquarium appearance:

See you all in the blue!