Rebecca Coales, trained by Steve Millard of the Apneists UK group, managed to extend her own record from 179 metres to 186 metres distance underwater swimming with a Mono Fin. The total dive time took 3 minutes at Grand Central pool operated by Life Leisure on Saturday the 29th November 2014. It was overseen by internationally qualified judges from the main Freediving agency, AIDA International.

Rebecca Coales video of her record

It was part of a larger competition, where athletes from around the UK came to Stockport compete in one of three disciplines. Dynamic apnea with Fins (DYN), which is swimming horizontally, as far as one can, wearing a single mono-fin or bi-fins. Dynamic no fins (DNF), swimming as far horizontally as one can with breast stroke. And static apnea (STA), lying stationary holding your breath for as long as you can. Each discipline has a point score, the highest point score wins, simple. We also have depth disciplines but this competition just concentrated on the pool.

Rebecca won the overall female competition on the day, but an excellent swim by Beci Ryan of 163 metres was a very respectable second position. In third place was Scottish number one no fins diver Katey McPherson who has recently done a no fins clinic with Apneists UK swimming 107 metres with no fins on. This is much harder to do in a 50 metre pool than the normal 25 metre pool as there is less benefits from the push off.

As always Steve’s competition ran very smoothly and I had nothing to worry about apart from my dive. It’s extra special for me to be competing in the town I grew up and in such a fantastic pool. Safety, judging and organisation was very slick.

I had a warm-up dive in Berlin two weeks before this one and that gave me more confidence in extending my personal best. It was also a chance to try my new Aqua Lung freedive suit, which has performed well in both competitions, and looks really stylish. A big thank you to Aquasphere UK for providing me with a suit, goggles and training aids.

I’ll now turn my attention back to training breast-stroke/no fins and static in preparation for the UK Nationals next March in Liverpool. I hope to compete again before March, but have yet to decide where.

I’m lucky to now be part of Team Bath (University), who are supporting me with physiotherapy and nutrition advice. We hope to do some fitness tests in the Spring to help understand the effects of pool freediving on my body so I can fine-tune my training.

I’ll continue to work with my coach Steve Millard who has supported me over the last two years to reach my 5th national record. We also look ahead to the AIDA pool World Championships in Belgrade where I’ll compete against the world’s best. I can’t wait! ‘
For the men Adam Drzazga won overall with a 136 metre dynamic swim, in second place Lorenzo Baldecchi with a decent static and third place was Hungarian freediving champion Mike Benke. Interestingly, Jason Kirkpatrick from the Scottish Apneists UK group was the opener, so wasn’t officially entered into the competition, put in a 5 minute 22 second static and would have won the mens title after only a few months training in the sport. One to watch out for. 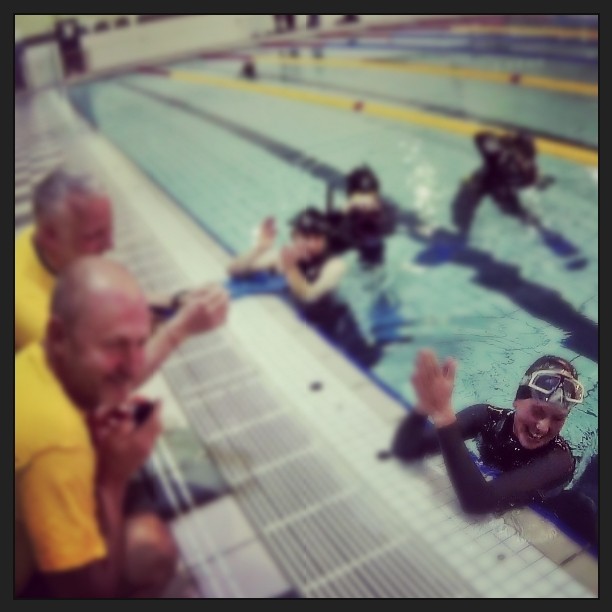 As Freediving grows steadily in the North of England, we have been running professional courses and have had groups operating for well over a decade. Freediving however isn’t just about competition; it is also an enjoyable recreational activity taking us to all parts of the country. freedivers.co.uk started in Manchester but we have clubs in Liverpool, some in Yorkshire, Wales, Scotland and Crewe with people travelling to us from far afield. There are many opportunities for people to start to try Freediving nowadays. It is a great sport for increasing fitness and losing weight, as a confidence builder for Scuba divers, for snorkelers we can give you an improvement in style and ability helping those wanting to explore the reefs on holiday and of course it holds the exciting possibility of records for those who have good swimming style.

Freediving is an extremely personal sport, you do your own dive on the day, but at the same time you never dive alone without someone properly looking after your safety. I think this, in part, is one of the reasons for the  strong, welcoming, community spirit within the sport and, all divers encourage the best out of their peers whatever their goal may be.